tears of joy and the sound of a broken heart 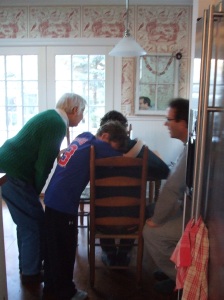 these things come in emails now. no fat or thin letter to weigh at the mail box.

the mail box is the one on your flat little screen. that’s where the news from colleges lands.

and so, at last, after all the years and months and weeks and days of wondering, worrying and waiting (and not in that order), there came the email that appeared from first glance like any other: sender, subject line, date, time.

the boy on the verge of college discovered it there in his in-box in the thick of 8th-period art class. he yelped, but did not open. he yelped only because it was there; he saw the name of the college, the one he’d decided was first on his list, the one he’d promised to go to, should the letter read the way he hoped and prayed it would.

the boy, not wanting to be surrounded by classmates as he got the holy word, turned off the little black phone. tucked it away. and once the school bell rang, he called for a ride.

that’s where i slid into the story. i was the driver.

but the boy wasn’t looking.

we were heading toward home.

once in the house, in a rare series of tending to hanging up clothes, he slung his coat on the hook, tossed boots in the tray.

oh, lord, why now must he decide to be tidy?

the little one, i noticed, was already pacing, walking in the circles that come when you’re worried.

his father, home with a nasty case of poison from food, had to bite his lip to keep from chiding, wondering aloud if the one with the email could go very much slower?

and then, at last, he carried the laptop down from his room to the old kitchen table where you still can find my third-grade cursive pressed into the maple planks. he flipped open the lid. and couldn’t get into his email account.

the little one paced. the father bit lip.

at last, there it was, the email marked “amherst college early decision notification.”

someone—i have no clue who–yelped.

that’s when i saw what the little one did: he threw his arms and half of his chest over the shoulder and back of his very big brother, his brother who, as of that email, was really and truly headed to college.

at first not a sound came from the little one. but i saw the arms and the t-shirt starting to shake. then the muffled sound came, the sound of a sob so deep and so piercing i will never forget it.

his face, buried in his big brother’s neck–the neck once broken, now mended, except for the crick that he cracks now and then–soon showed the tears that were pouring.

he hung there for what seemed like half of an hour.

maybe it was less. but time, when it hurts, feels like forever.

and so it went most of the night. tears off and on, all around. joyful ones, mostly, from me. ones that washed out all the oh-my-lord-how-did-we-get-here? and ones that swept over the hours and days when it seemed we’d not get here–ever.

sorrowful ones from the sweet little brother whose world has just shattered. or at least that’s how it feels.
you see, that little brother was the dream come true, the rest of the picture, the missing piece, when the college-bound kid was just a third-grader.

until now, somehow, we hadn’t realized that the equation would twist in the middle, and the little one who’s only known full, who’s only known what it is to have a big brother just down the hall and two steps away, well he now is trying to make sense of how that room can go dark, how the place at the table won’t be set for months on end, how he’ll get through the weeks and the weekends without his big tall brotherly hero?

some time after dinner, as i was cleaning the sink, the big one said, “gosh, i’d never thought that’s how it would be when i finally got into college. there was so much sadness mixed in.”

i looked up from my sponge, and said, “life is like that, isn’t it? so rarely pure anything. so often, a soup.”

later that night, when the little one went in to say goodnight to the college-bound brother, the tears started up again, in a quieter sort of way.

the big one melted.

it was 10 minutes past 9, so i looked at my watch, wondered aloud, “how long would it take to go get a slurpee? bedtime can wait.”

so the two curly-haired boys, one with his heart full of very good news, one with his tank nearly on empty, arm in arm, they trudged out into the dark and the cold.

the little one treated. the big one slurped.

they laughed. they came home. the big one tucked the little one safely and snugly into his bed.

tears of joy, muted by the sound of a near-shattered heart.

it’s tough, this spell right through here, where so many kids i have loved for forever are feeling their futures laid on the line. too many kids are hearing words like rejected, deferred, not yet. hold your hopes. we are counting our blessings, and whispering mountains of prayers for each of these kids. the world out there needs some kind of miracle: and i know a whole bunch of those miracles, kids on the verge of going to college. for those kids, for the teachers and lights in their lives. for the mamas and papas who’ve loved them and worried, and coached and cajoled. for the patience lost and the love discovered again and again. for all it, i pray.

we’re in year five here at the chair. not sure if i will stick to fridays, or just write when the spirit moves me. come take a peek.

and a prayer, please: my dear dear beloved friend katie. her blessed m.c. is 18 and fighting a cancer that will not go away. mightily, please, pray.

and bless you for stopping by here today…..