a cry for holy Earth…

a cry for holy Earth…

or might it be a cry from holy Earth?

i’ve been up since the chorus of dawn awoke me. the night, as it faded, grew thick and thicker in cacophony of high notes, the ones that warble from the breath of birds. 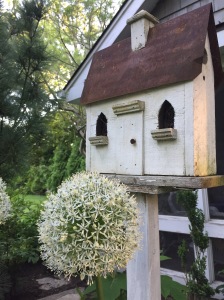 i tiptoed down the stairs, and planted myself in the awakening of the day. i watched the sun rays, inch by inch, rise above the fence on the eastern edge of my garden. watched the sunlight wash the stems and leaves in slant of incandescence. watched the shadows come. and the patchwork play: dappled morning proof.

the day’s upon us. and the earth must want to crumple under heaves of tears. the heavens, certainly, are crying.

that blue marbled orb above, the one afloat in sea of darkness, it’s holy Earth, the one small orb upon which souls live and breathe. souls delight. souls mourn. souls hold hands and dance. they collapse in sorrow, too.

that one marble in the universe, it’s ours to keep. it’s where the theatre of life plays on and on. from socrates to shakespeare and beyond. it’s held horrors — horrors beyond divine imagination: the holocaust. the civil war. vietnam. the awful wars — wars I and II.

but, too, and mostly, it’s been the stage for risings up of the human spirit. it’s where Gandhi walked. and the land where Jesus drew lines in sand. it’s where the brave souls of Selma gathered to march across the bridge. it’s where each and every day unnoticed acts of heart play out — the special needs kid charging down the soccer field with the ball, who then notices his little friend off on the sideline, crying for the ball, so he takes a U-turn, runs the ball to his friend and lays it at her feet, so she can score the goal.

every once in a while, the act of goodness is so spectacular, the whole world takes notice. (consider here the three who, on a portland train last week, rose up against anti-muslim racism, laid down their lives in the face of evil, and then the grieving mother of one wrote a letter to the President, writing of her son, “in the face of hate he did not hesitate to act with love.”)

it’s the planet we call home. it’s where our everyday acts of heroism and atrocity play out. it’s ours to keep. to tend. to till. to caretake as it takes care of us. we are its harbor masters and its holy guardians.

for me, it’s not only where i plant my feet, it’s where my soul finds breath, takes flight. it’s my cathedral, the sanctuary that taps me on the heart and whispers, God is here. did you catch the moonlight through the leaves? did you see the mama bird pluck the worm and fly it home to where her babies chirp? and what of the butterfly, the one that alights on the meadow rue? or the monarchs who every spring and autumn, criss-cross half the planet, returning to the very same tree, generation after generation?

those are the everyday wonders, the ones that unfold just beyond my kitchen door. i’m not even talking majesties, the likes of yosemite and china’s nine “most-sacred mountains.” the ones that just might melt me at the knees, leave me gasping to fill my lungs with breath.

there is so much magnificence i’ve not seen, so much i can barely begin to imagine.

but it’s been entrusted to us. all of it.

as i lay under my sheets, listening to early morning’s song, i began to cobble a wonderlist, those sacred blessings of holy earth, the countless wonders that set my soul aloft. for me, they’re all keys unlocking the doorways deep within, inviting in the swirl of heaven here on earth. they’re where God comes in, takes me by the hand, takes me soaring. where prayer and breath are one…

the list goes on and on and on…..i could — and should — keep a life list. in fact, maybe i just will. and in the meantime, i and all of us who know this earthly orb as a one-time gift from the heavens, we will rise up against the counter-tides. we’ll not let the sacred be wiped out by obstinance and ignorance. we’ll stanch the cries of holy blessed earth, apply the few wise balms we know….

please, please, add to the list of wonders brought to us by heaven and earth in their ineffable gloriousness….

and may your first weekend in june be blessed…..

hang on, holy Earth. we’ll not abandon you…. 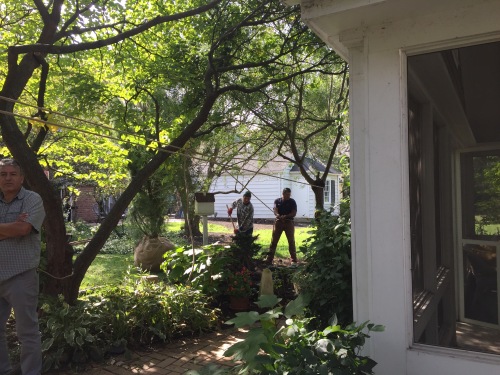 we moved seven in all, including a willow that might still be weeping, what with all of the yanking and pulling and lynching there at the roots.

i watched from the window, rapt; my nose pressed hard against the glass. i poured coffee, sliced into cakes. you can’t be too fed or too quaffed when you’re wrenching old trees from the depths of the earth.

there are those who rearrange chairs in their living room, slap on a new coat of paint. we, though, are more inclined to what’s beyond the walls, under heaven’s dome (or i am anyway), so we did our shuffling out there, in the place that’s alive. in the place where shadow plays against leaves, and wind comes in whispers or roars. where chipmunks and rabbits have at their everyday’s salad. where whole families of birds have been known to move in their nurseries — and their flight schools.

i’m waiting right now for the christening that comes when the cardinals move in, come back, settle their crimson bums in the boughs, let out a whistle. let all the birds in the ‘hood know that it’s safe to return: the garden’s up and running again.

it was a reclaiming, this vast swoop of trees and shrubs and the bulbs that came along for the ride. our back garden had gotten a bit out of hand over the years, and then in the last few weeks, trees nearby had been felled, leaving big holes in the sky, in the earth, in our hearts.

the man i married, the very fine man who understands how deep these things run in my veins, he wasn’t about to stand back and watch me be felled, too. he ordered up — in a move most magnanimous — a repair, one marking the quarter century we’ve been blessedly married.

until the wheelbarrows and ropes and muscles arrived, i’d never quite realized you could rearrange your patch of earth quite this emphatically. oh, i knew you could move a clump of queen anne’s lace. guessed you might retrain a vine. but who knew whole trees could all but take a walk, shuffle a few yards to the north and the east, settle in against the old screen porch, bend their boughs just where we needed a shadow?

what i love most, perhaps, is that nothing’s been ditched. history has been saved. each tree has a story, and the story’s intact. right now, the whole crop is adjusting. getting used to new digs (literally). i’m left to do my part with the green snake of a hose, and its constant dribble of drink. rains came the other afternoon, not long after the digging and shuffling was done. i felt each and every branch let out a sigh of pure joy. each little leaf did a dance.

the bulbs will come next. i ordered up a delicate batch, in shades of white and deepest blues. i’m fine-stitching my garden, petit point of the earth. and my mama stopped by with a whole sack of birdseed, an apt gesture of welcome indeed.

it’s all sacred equation. with a fair dose of fairy tale, too. i’m one of those quirky old souls who still plays pretend, most of all when it comes to my garden. i see a meadow where you see a clump of old weeds. i make-believe i’m meandering through a secret vale, and all you  behold is a nook you might describe as a threat, with vines on the loose, and canes of old rose that dare to scratch you to shreds.

i hum best when my garden is whole. when i look out a window framed in nodding hydrangea, when a cardinal is perched on the sill. i need to brush up against God’s holy earth, the unending ebb and flow of wonder, of awe. of one season tumbling atop another. i need birdsong to perk up my soul. i need the soft light of dawn or of dusk to know i’m wholly alive.

and thanks to the shuffling of trees, i’m stirring to life again.

what stirs you to life again?

what a week: new garden. day of atonement. manuscript dispatched to editor. all i need now is a long autumn’s nap.