home alone — and hearing a cry

it’s just me and the basement crickets here. (i ought to name the whole herd of them since they so noisily, chirpily, send me love songs through the dawn — and the midday — and the late afternoon — and the twilight. deep into the darkness they keep up their chatter.)

the boys i love are faraway. i stayed home because i have a job at the high school, hosting 414 debaters from around the country. feeding each one, breakfast and lunch for the next two days (today we load in provisions). i’d thought i’d write a meditation on being alone. on the luxury of it when you don’t often have it. i know for some it’s a curse; alone bleeds often, bleeds quickly into loneliness. the first syllable — the  a of alone — breaks off, and two new ones cling to the end — loneliness — and suddenly the gift of doing as you please, sleeping with windows open and shades up — because you love the light of night, love even more the dawn’s beginning — all those singular quirks, they can become the humdrum hollowed refrain of a life lived alone not wholly by choice. by grief. by happenstance. by necessity.

but i woke up this morning, and the cavernous cry of this nation — of the countless volumes of women putting breath to the screams they once muffled — it’s echoing inside, rising louder and louder. and i know there’s a vote just hours away. and i know that sitting here listening to the roll, hearing the single syllable rise up, yea or nay, one after another, it’s going to feel something like a gut punch. did you hear her? i will ask, over and over and over.

there will come — for some of us anyway — an unshakeable sense of being kicked aside. of   “ramming this through,” as the senate majority leader himself so unpoetically put it.

there is, though, a gentle breeze of hope this morning. it comes from sweden, from the nobel committee which during our night (their midday) awarded the peace prize to two who’ve dedicated their lives to a fight against sexual violence. one, nadia murad, is a 25-year-old woman, captured, repeatedly raped and tortured by ISIS; she escaped and, ever since, travels the globe speaking out against the atrocities. her inexhaustible journey has left her exhausted, but she refuses to pause, insisting: “i will go back to my life when women in captivity go back to their lives, when my community has a place, when i see people accountable for their crimes.”

time magazine, in their annual centenary of “most influential people,” included nadia in 2016. eve ensler, the playwright and founder of V-Day, a movement to end violence against women, wrote this for the magazine’s roster:

A witness for war’s victims

Nadia Murad stands in a long, invisible history of fierce, indomitable women who rise from the scorched earth of rape during war to break the odious silence and demand justice and freedom for their sisters. At 19 she lost her home, her country, her culture, her mother to murder; witnessed male members of her family murdered in mass killings; and was kidnapped, sold and endlessly raped by members of ISIS. She now travels the world speaking out on the genocide being inflicted on her Yezidi people and demanding release for the more than 3,000 women still held in bondage.

As Europe closes its borders to terrorized refugees in Greece and the U.S. turns its back on the suffering, Nadia is a beacon of light and truth—a reminder that it was the American-led war in Iraq that laid the path for ISIS, that U.S. arms left behind on the battlefield fell into the hands of ISIS and that the U.S. waited too long to intervene in the mass killing and enslavement of the Yezidi people. At 23, Nadia Murad is risking everything to awaken us. I hope we are listening, because we too are responsible. 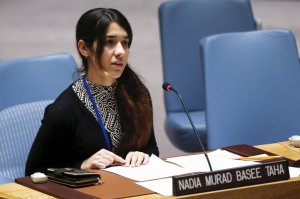 i leave you with nadia, with the faint waft of hope. i know, come time for the vote, we will all be standing shoulder-to-shoulder, heart-to-heart, promising we will do better for our daughters, our sisters, our sons, and our brothers.

(i do not for a minute want to overlook the second nobel peace prize winner,  dr. denis mukwege, 63, a congolese gynecological surgeon, who campaigned relentlessly to shine a spotlight on the plight of congolese women, even after nearly being assassinated a few years ago. working from a bare hospital (often without electricity or enough anesthesia) in the hills of the eastern democratic republic of congo, he has emerged as a champion of the congolese people and a global advocate for gender equality and the elimination of rape in war, traveling to other war-ravaged parts of the world to help create programs for survivors.

“it’s not a women question; it’s a humanity question, and men have to take responsibility to end it,” dr. mukwege once said in an interview. “It’s not an africa problem. in bosnia, syria, liberia, colombia, you have the same thing.”)

may the persistence of justice rise up in all of us today. and tomorrow, and all the tomorrows thereafter. may the fiery determination of nadia and the unrelenting faith of dr. mukwege drive all of us through the fog of despair.

p.s. i’m leaving off a picture up top today, because silence and the sound of a cry are best left unseen….

3 Comments to “home alone — and hearing a cry”