humpty dumpty powder and other tricks of motherhood 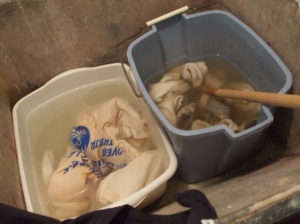 indeed, and thank goodness, not all the falls that befall our little ones are great ones.

sometimes brought on by being brave in the woods. sometimes by being brave in the woods for two long weeks you thought might never end. sometimes, they’re stirred by spending the night in a tent on the side of a sand dune, on a night when the thunder and lightning would not cease, when hail pummeled the tent flaps, when the counselors at 3 a.m. shooshed you onto the bus for safekeeping, while they struggled to stake down the flipped-over tents, and all you could manage was to pray for dawn’s first light, and a cure for the ache in your belly.

and so, when you get to the end of that shell-shaking spell in the woods, when your mama pulls up to the dried meadow at the edge of camp, and you leap out of your flip-flops to throw yourself into her arms, you need your mama to reach deep into her bag of mama tricks and pull out the humpty dumpty powder.

you need your mama to put you together again.

that’s what mamas do best. that’s job no. 1 in the old mama bible.

oh, sure we birth those babes back at the launch. but from then on in, it’s our supreme holy calling to be there for bee stings and dog bites and nights without end in the woods.

and it is indeed how i am spending these hours, ever since i picked up my brave little camper there in the woods.

didn’t take long, not more than a minute, to see that this hadn’t quite been a picnic, no mere frolic on the shores of torch lake. and it wasn’t simply the stench coming from his toes, there in the back of the homeward-bound rescue mobile.

there were clues, the sort a mama can read without prompt, that the boy sound asleep for most of the car ride, straight through michigan and half indiana, had utterly and completely tapped out his stay-strong tank.

heck, he’d survived on PB&J for the better part of 13 lunches and 13 dinners. even the night of the all-camp banquet, when ribs and baked alaska highlight the menu, the boy i love filled up on “four ears of corn and candy.” his words, exactly.

no wonder he came home sun-browned and skinny.

so, besides the bottle of bleach and the buckets for multiple pre-soaks (half the loam of the woods came home stuck in our little dude’s socks), we have pulled out all stops here on the home-team recovery squad.

we’ve squeezed triple-antibiotic ointment into oozing blisters on the sides of both feet. we’ve fluffed a pillow, unfurled a blanket and rubbed itty-bitty circles there where the headache pounded.

but the best cure of all was the big brother who’d once roamed the same woods, downed the same baked alaska. he knew the camp songs, the lore, the legend. he got the kid laughing again.

come dinner time, we let the little guy order up a feast of favorites: from-scratch mac-‘n’-cheese, ditto the applesauce, corn on the cob (minus the candy, his mama insisted), all washed down with cherry pie ala mode.

in no time, we suspect, our little camper oughta be back to his usual mostly-unflappable self.

but one of the breath-taking truths of motherhood is that you’ve got a rare, front-row seat on the naked work of growing up and learning to be brave.

i’ll never forget that kid standing at the window, just two weeks ago, the night before we left him at camp. he was staring up to the starlit dome, and, even there in the dark, you could read the prayers spill off his lips, and the way he wrapped it all up with a sign of the cross, and a tip of his palm to the heavens, just like the ballplayers do. he was beside himself with worry, he told us. could not imagine going two weeks without seeing a glimpse of us.

and that’s what i keep whispering in his ear.

“you did it, sweetheart. you did the very thing you thought you couldn’t.”

and if, for the next coupla days, we need to stoke you with buckets of cherries, and lavish you with kisses, we’ll get you steady on your feet. because we’ve seen you, backlit by the night sky, in your hour of near-despair, and we’ve felt our own lungs swell, at the depth of your courage: you took to the woods, little one, and you found your way home, shaken but not cracked.

tell me your tales of profiles in courage you’ve witnessed up close and personal. humpty dumpty powder not needed.

8 Comments to “humpty dumpty powder and other tricks of motherhood”