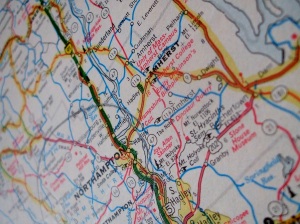 at some point, in all my years of imagining, in all my years of trying to wrap my feeble brain around the hard-core notion that my babies would one day grow old enough to pack up their belongings and head off toward so-called higher education, i’m certain i once had visions of pitching a tent just outside the dorm, maybe off in the bushes, where not everyone would notice.

maybe i could rig up a pulley, slide up trays of OJ and tea, from just outside the window. maybe i could doze in the honeysuckle, but be within earshot if the boy ever took sick. or stayed up too late. maybe i could fool everyone into thinking i was just another bushy-haired varmint, burrowed there where the earth met the great gothic wall.

but then, in real time, the boy i love, my firstborn, he up and did leave for college, and i knew well, knew from the very first instant i saw him leap from the car in the deep of night to grab his key from the campus police (where, due to impending hurricane, all keys had been moved), that this was his landscape, this was his place to stretch and grow and discover and deepen. this was his canvas.

and, for the first time in our deeply tethered existence, i didn’t belong.

i remember quite precisely how much that stung, the feeling of being pushed some distance away. oh, i know that’s the way it’s meant to be, but i can’t say that it didn’t take some rubbing of salve to the wound. i clung to the balm that the closer we’d been, the harder the push needed to be.

and i waited it out.

i swallowed hard the day on the phone when he said it might be better if we not make the trip for parents weekend. after all, he reasoned, he’d soon be home for thanksgiving. i’m pretty sure, once we hung up, i sat down and cried. but i didn’t let on. i just prayed without end.

and once he was home, indeed, it was just like the old days — me, laughing so hard at his stories and antics i could barely chop through an onion without fear of surrendering a digit to a sharp and flailing knife. him, curling up in an armchair the very last night he was home, asking if please, could i stay up and talk for a few more hours.

deep in the winter, when i was scraping the pit of my soul, trying to decide if i should leave my long-loved newspaper life, i dangled one dazzling dream in front of my weary eyes: i’d take a trip, all by my lonesome, to visit the boy who i love, to absorb this new world that was his.

that would be my hallelujah valedictory tour: to walk, arms looped elbow-to-elbow, under the tree limbs, through the quad, in the new england town whose night sounds are his now.

and then, suddenly, it was spring.

for weeks, as the trees turned lacy and green, i was getting reports, eye-witness reports, from all sorts of friends who’d stumbled upon him, friends who’d swung through that new england town as they took their own babies, now juniors in high school, on that modern-day rite of spring, the spring-break college tour, in which you pile as many campuses as you can into your five-day cross-’em-off-the-list itinerary.

why, they’d bumped into him in libraries. shared pizzas with him. taken him out for feasts without end. and with every encounter, came the glowing accounts: how happy he was. how, wherever he went, he was greeted with shouts of great joy. how at ease he appeared, most of all. how he certainly seemed to be thriving.

with every report, my itch grew and grew: i needed my own first-person account. never again, i told myself, could i catch this first year unfolding. it was all slipping swiftly away.

and as i looked at the calendar, i knew i was running out of weekends.

a not-so-secret truth about me is that i am, through and through, a homebody. plane tickets and rental cars, and getting up at wee hours to make flights and drive through parts unknown. these are not a few of my favorite things.

but, more than anything, there is a boy i love. and he is beaming these days.

and, as a mother who was there in the darkest hours, as a mother who held him tight so many nights in the kitchen when the tears wouldn’t stop, as a mother who whispered in his ear time after time that some day it would be a glorious thing to be him, a boy forever wise beyond his years, as that very mother i needed to take this all in for myself.

i needed to trace all his joy — his abundant new landscape — into the contours of my heart.

the so-called reason for this last-minute trip, the one, yes, i’ll be taking tomorrow, is that there is a championship rowing regatta, and his boat — undefeated for the season — is seeded no. 1, meaning that for the very first time in his not-so-athletic life, he stands a chance of (shhhhh…) not being crushed in heartbreaking defeat. and i stand a chance of hollering my lungs out, swatting back tears, there on the shores of lake quingsigamond.

but the real reason i’m waking up at 3 in the morning, tiptoeing out to the cab in the dark, leaving spelled-out instructions for the little one’s 48 hours without me, is as simple as simple can be: all i want is to be there.

all i want is to walk the paths where my firstborn so easily trods. to catch the dappled light on my own face, as it has dappled his all these days, weeks and months. to look into the faces of a sea of kids who know my boy by his name and his joy. to absorb the geography that is his now. i want to smell it, taste it, hear it, touch it, commit it to full-body memory.

it’s the very last day of classes tomorrow. his freshman year ends in less than a week. i am getting there just under the wire.

lucky for me, i’m married to a man whose motto is one i still need to work on: “98 percent of life is just showing up.”

i think he knew, without me saying a word, just how close i’d come to talking myself out of the trip once again. i’d come up with 58 reasons why it made more sense to stay home. but he gently and firmly kept me on course. just this morning i found he’d typed out a whole road map to steer me through what might have been bumps along the way: which concourse i’d need to trek to, how to pick up the rental car, the tricky turns on the road to the college. he even made sure i’m staying at the bed-and-breakfast across the lane from emily dickinson’s house.

and once again i am learning: life is ripest, is sweetest, if you dare to take a front-row seat, and not keep watch from the shadows.

even if it means you slip in right under the wire.

just so you get there, where you can take it all in, body and soul. and forever.

so there you have it: i am past the mid-century mark, and still i must talk myself out of my comfort zone, and into the halls of courage. it’s a funny thing how we all have our stumbling places. what propels your courage? what gets you up the mountains of your life?

9 Comments to “under the wire”