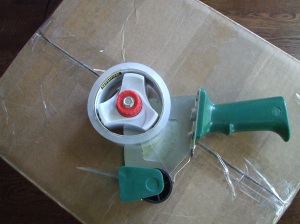 you would have thought it was an instrument for which i needed a license, the way i wielded it, the way i darn-near steamrolled whatever got in my way. stand back, was the only word of caution uttered.

i had my hands on a certified defense weapon, with sticky side.

all it was, was a roll of Scotch brand shipping tape. heavy duty, specified. i made sure i got the strongest one known to humankind.

i’d bought two rolls (can never have too much). weeks ago. had let them idle beside the pile of dorm essentials tucked in the living room corner, the pile i tried to pretend was not there.

i knew that some day soon the hour would come when it was time to turn the flattened cardboard boxes back into three-dimensional pop-up vessels.

when the fallen trees would be called upon to do their duty: to get my firstborn’s college essentials–the memory foam mattress topper, the shower caddy, the over-the-door towel rods, the extra-long twin sheets (monogrammed, thank you)–to the room where they’d be home.

so there i was, alone in the living room, when at last i lifted the gizmo that unfurls the tape. it’s heavy. it’s plastic- handled. it’s got one sharp cutting edge that can rip the dickens out of your mortal flesh.

i started strapping strips of tape. it hit me right away: i liked the feel of all that sticky gooey plastic holding in the contents of my firstborn’s brand-new life. i strapped and strapped. cut nice long slabs of tape. slapped ‘em, sealed ‘em, ran my palms smooth along the not-sticky side.

suddenly i realized i was taping as if there was no tomorrow. i must have used half a roll of tape. on the first box.

then i got to the second. was overcome with need to tuck in one last love note.

hope that strapping 6-foot-something lad doesn’t mind that i grabbed a sheet of construction paper. pink construction paper. and with my favorite zig-zag scissors, i cut out a little pink heart. wrote, in red, “forever my beloved.” or some such words. it’s all a blur now. i was in a fevered, sticky-taped frenzy when i did it.

all i knew was that suddenly i was aswirl in out-of-body incantation. i was taping each and every box as if mere Scotch brand tape could keep my boy from harm. from any harm.

i wasn’t so much taping to keep the boxes from splitting in the UPS truck. i was taping to keep my boy safe on the side of the mountain he’ll climb in freshman orientation. i was taping to give him strength on the all-nighters i know he’ll pull. i was taping to avert the stern glance of some professor who some day might tell my boy a thing or two about the responsibilities of scholarship, should he dare to blow a due date on some 90-page thesis.

i was taping against the heartache that will come if some day he loves someone who doesn’t love him back. i was taping to keep him afloat in all the rivers, in all the boats, that he will row.

and that’s when i realized, once again, that motherprayer is so much more than words. it’s what we do and breathe.

it’s stirring oatmeal on a winter’s morning, it’s using half a roll of tape to seal shut, to protect, a box of sundries for a college dorm room, as if in simple acts of stirring, sealing, we can wrap our children–even when they’re no longer little ones–in a sacred shield of holy light.

impenetrable, we pray. “be safe,” the final words we whisper every time. words that, now, mean so much more than simply, “i love you.” that’s understood, implicit.

“be safe” is poetry, is vessel, for “i would die if you were hurt, were harmed.”

“be safe” is motherprayer for when you send your child, the fruit of your womb quite frankly, off into the world, a world you can’t control, a world that some days, some dark hours, shatters you.

“be safe” is hope and faith boiled down into two short syllables. “be safe” is the last line of defense, the thin membrane on the other side of which prayer and holy angels pick up the load.

and some late-summer afternoons, when the sun slants in the front-room windows, illuminating your task, as you tape and seal five boxes, there are no words.

only the mad wrapping of a mother who will not let harm come to her child—or his memory foam mattress topper.

so help her, God.

and what are the wordless incantations, the rituals you repeat, as you aim to keep the ones you love from harm in any form?

one week from today, our head-off-to-college date. all this week, mamafriends of mine have been shuttling children to the college campuses where they will spend the year. lots of soggy pillow cases, right in here. lots of feeling lost. back at home, that is. pray to God, not in college dorms. as hard as it is for us, may it not be hard, dear God, for our children who are spreading wings and taking flight…..

6 Comments to “taped, all right”