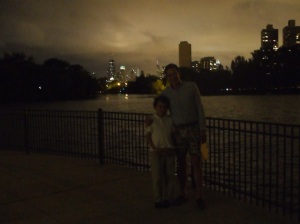 when he was not even 2, he looked up through the skylight as i tucked in the covers, soft by his shoulders. “mommy,” he wondered aloud, “who puts God to bed?”

when he was 3, he looked up from the kitchen table, and asked, “mommy, what is facetious?”

i’ve been side-by-side with this questioning child for 18 years now. i’ve gotten used to the way words unspool from his mouth, from his mind, from that heart deep inside.

but that doesn’t mean i’ve stopped catching my breath, feeling the air stopped in its tracks, when some of the thoughts come.

and so it was, the other night, sitting at dinner alongside a pond in chicago’s lincoln park, that great front yard of the city, looking south on the muscled shoulders of steel and glass that scrape the sky.

we were feasting, had sipped the watermelon, basil and gin cocktail (i don’t drink gin, but this had to do with a newspaper assignment, and that boy beside me, he sure didn’t mind). had scooped the very last drop of asparagus puree from our plate, and duck rillettes from a charcuterie slab.

the little one and his papa had gone off to visit the so-called powder room, when my brand-new 18-year-old took in one of his sighs, the kind where the smile begins with the first uptake of air, and the eyes start to glisten, and i pretty much know that what’s coming next will enchant me.

“you know,” he began, “this is the first time in my life a whole phase of my life has ended. my childhood is over. it’s not like you can reach back into any of the moments and shift it around. it was what it was. and even if i don’t remember one moment, or the one after that, the experience of that moment is all there, is a part of who i am.”

then he just smiled.

or i think so. for my eyes were veiled in a scrim of tears, that holy blessed water that anoints so many moments of life. sanctifies. signals, my heart has been touched here. is pounding. is spilling. cannot be contained.

i tumbled the words in my head, in my mouth, so many dew drops of wisdom packed in each one, so rich was the taste on my tongue.

and that, perhaps, is the crux of why 18 matters. not that he can now buy cigarettes; which you know he wouldn’t. not that he can vote, which he can and he will. oh, will he. and not, as he remembered to tell us when ticking off the new-found legalities, that he can now buy playboy magazine. which i would bet he won’t do. (and which prompted the little one to ask, loudly, “what’s playboy?” to which we all shooshed him quite emphatically, as fears raced through our heads that he’d be tossing that just-discovered word around on the fifth-grade playground.)

the words kept tumbling through my head, and suddenly so many scenes pop-pop-popped.

the summer camps at the zoo, and the planetarium, and that great hall of midwestern pluck and twang, the old town school of folk music.

the little boy in the NASA astronaut suit. the little boy in the blue-striped engineer’s cap. the boy on the baseball team in hyde park; the boy standing in the T-ball outfield, turned away from the pitcher’s mound, pointing toward the sky, hollering, “look, there’s venus.”

the boy sitting on the roof of the playhouse on the playground at lab school, watching–not playing in–the schoolyard games. the big move to the 10-mile-away town where all is leafy, is mown, is too-often manicured, leaving behind the pop and the whir of the city he loved. the el rides, back. the boy who would not leave his city. a boy forever enchanted with urban grid, and thoreau’s wilderness.

the tearful nights in the kitchen. the angst of all-nighters. the company he found in the pages of nabokov and faulkner and emerson. the arc of limitations he tested, wrapping his palms ’round the oars, rowing his heart out, not looking back.

it was what it was.

and i couldn’t help but think of how very wholly i had poured myself into the work of being his mother, of all the hours and brain cells and blood cells it took. the signing up for this camp or that. the filling out form after form. the driving him long ways, and jam-packed ways, at all hours. the praying. the worrying. the peering in through the classroom door to see that all was well.

mothers do that, knowing or not. we set out to be our child’s field guide and companion. we arrange and re-arrange. we call people we don’t know, speak words that don’t come easy sometimes. we listen 24 hours a day. we carry our children wherever we go, even when the miles between us are many.

but for that whole first chapter, the one whose last page has just turned, i was fully awake, fully on board.

i gave that boy the best that i had. i’d made him that promise. so help me God, i did not run away, not on the nights when i had no answers, not on the mornings when worry consumed me. not when, for the 9 millionth time, i walked in his room and witnessed what happens when a cyclone blows through.

i was, forever will be, the mother who plays in his childhood scenes. who will endlessly loop. i’m the one off to the left in so many frames. i am, more than anything, the one who is beaming.

the fact of the matter is this: the greatest gift i’ve ever known is the gift of being that boy’s mother. i have learned volumes. fallen umpteen times. scratched the depths of my soul, so help me God.

i have preached and promised and pleaded. i’ve stirred and baked and spooned in whatever was needed, oatmeal to amoxicillin, i’ve served ’em all.

it’s what we do when we discover our deepest calling is the call to mother a child.

that childhood is over. and my tasks there are laid to rest.

but that boy is riding today, in a car full of 18-year-olds, to a faraway city in the belly of michigan. there’s an interstate between here and there, and 18-wheel rigs that whiz by, hellbent on getting wherever they go in a hurry.

it’s time to let the boy go. his childhood is over. but don’t think for a minute that this day will be easy. his father is tied up in knots. i’m the one soothing, saying, he’ll be fine, when deep in my head i picture terrible things.

my last words as he strode out the door, that strapping tall boy with the duffle slung over his rock-hard shoulder: “come home safe, or i’ll kill you.”

the murky picture above is not so murky in my mind. it’s my two boys, after dinner, with the chicago skyline rising up over their shoulders. fireworks were exploding from behind those mounding rainclouds, and at first we thought it was red lightning, making for an unforgettable step into the night, as we left the north pond cafe, where we’d savored an unforgettable feast, an unforgettable marking of age. my camera didn’t do what i wanted, but i love the image anyway. it’s the way memory fades, yellows around the edges.

please forgive my tendency lately to write here as if i am tracking time, the close of my firstborn’s childhood, as he put it. one of the gifts of writing is that it serves as glue, to stick snapshots to the pages of your life, so you capture it, hold it. these stories are for down the road as much as for today. they are for me to read and re-read some day; they are for my boys to tuck in their boxes from childhood. in writing of life’s passage, i hope that each and every one of you finds a spark of your such passage, or the passage of someone you love. a blog is an odd-duck of a thing. a blog of four and a half years, odder still, perhaps.

these are but swatches of my heart. and if they spark something in you, my prayers are answered. do tell: when you hear the words, “my childhood is over. it was what it was….” what sparks to your mind? what are the scenes from your own childhood that have lasted through all the years?