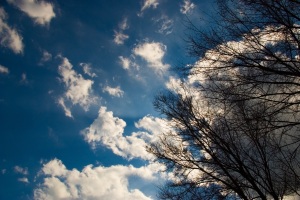 it is best practiced on your back. a blanket comes in handy. you can do it in a chair, or standing like a soldier. only then your neck gets sore.

it is eyes locked on heaven. it is watching celestial shadow games, the sun and clouds the players.

it is what happens, unless you live in a house of skylight after skylight, when cold and snow is ended and you finally step outside. into God’s cathedral.

louis kahn, the architect i love because i love his thoughts though not his buildings, talks about the treasury of the shadows. he writes: “light, the giver of presence, casts its shadow which belongs to light. what is made belongs to light and to desire…”

he writes later: “the structure is a design in light. the vault, the dome, the arch, the column, are structures related to the character of light. natural light gives mood to space by nuances of light in the time of the day and the seasons of the year as it enters and modifies the space.”

and so it is with clouds. clouds, i think, are heaven’s vault and dome and arch and column.

i watched the sunbeams play with clouds the other afternoon. i watched the light play peek-a-boo. first, absence of shadow, all light the same, as sun was captive to the clouds. then, as cloud skittered north and east, the rim shone piercing white, a ruffled edge illuminated from blinding light behind the vapored curtain. then, pop, sunbeam re-emerged and shadows danced again.

on and on it went. i was lost in clouds for the better part of an hour. my boys romped. one with camera, the one who caught the clouds above for me. the other one with sand and hands. each one of us lost in time. each one of us transfixed by light and shadow, sand and lake.

it’s what happens when you surrender to the calling of the blanket. the blanket that made you turn the car, and park, and haul it to the sands.

i am, as always, and as so many, many before me, very much a ready student in the great school of God’s world as it surrounds me. i am, me and my home-bound suburban life, hellbent on breaking out, breaking open the fragile and the monumental offered up by nature. be it clouds and light and shadow, or tender shoots refusing to be barred by crust of earth, i am seeping up the lessons, taking in the truths. there is metaphor all over. it’s deep and it’s profound.

and sometimes, when the clouds and sunbeams do their dance, it’s simply pure delight. it made me draw my breath, gulp the sky. it made me call the boys. “come watch this,” i shouted. “here, lie down.”

so the three of us, three logs in a row, we lay there on the blanket, we played a guessing game. when was sunbeam breaking through? when was shadow coming back?

the little one played his own game. he was playing circus in the sky. he saw a fire-breathing dragon. and then an elephant with trunk that poked the dragon in the bottom.

i particularly loved watching the parade of clouds through the filigree of branches bearing buds. it made the sky seem even more immense, made the clouds more beyond my touch. it made me feel so little.

i think, sometimes, that feeling small, in the face of God’s creation, is an extraordinary blessing.

i only wish i took the time to put my spine to earth, my eyes to sunbeam dance, every single day.

anyone else catch the clouds the other afternoon? anyone make a daily practice of gulping sky as celestial exercise?